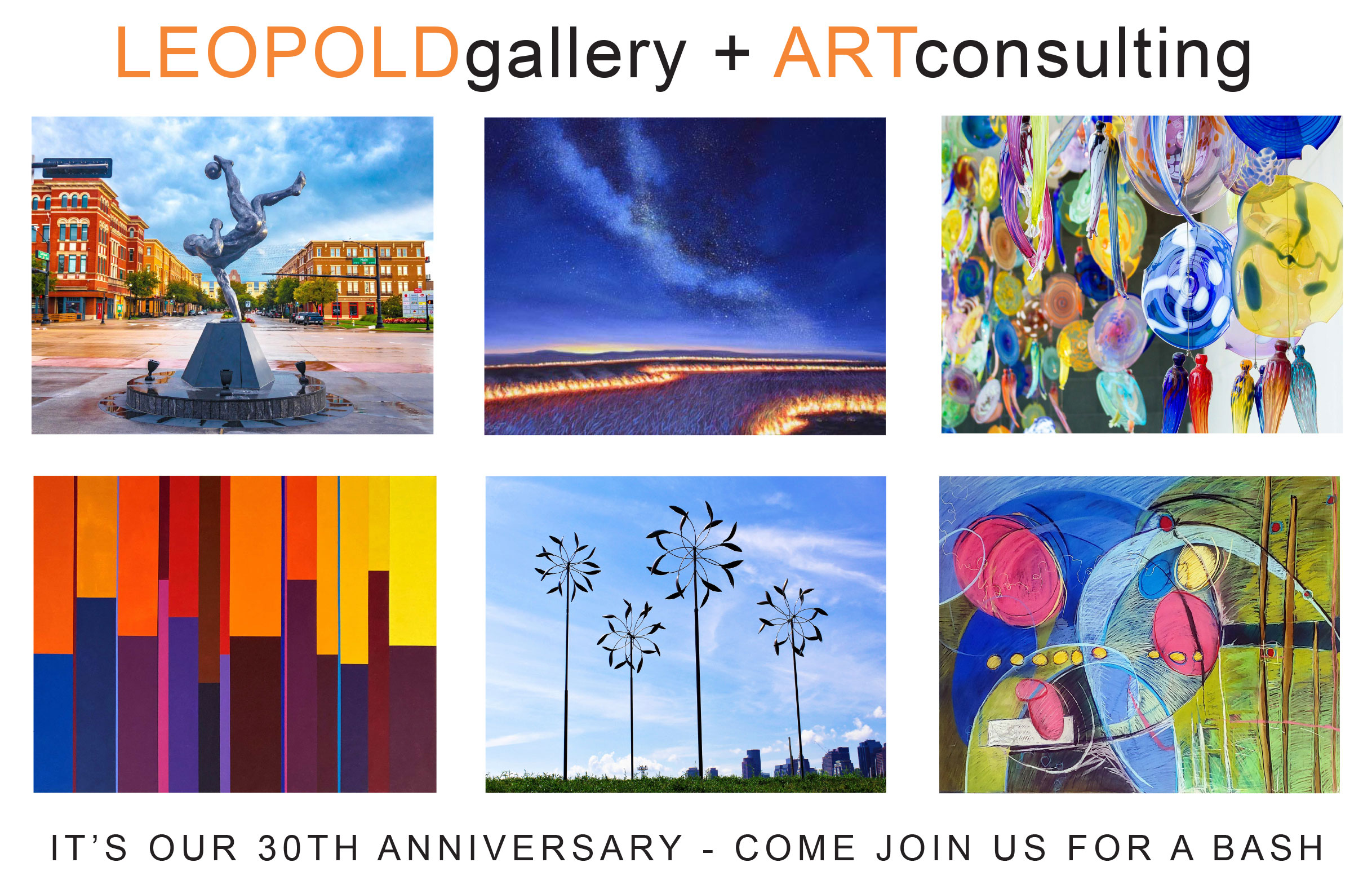 2021 marks our 30th year. What a cool journey it's been: installations for the US Capital Building, Marvel Studios, Warner Brothers, Disney World, as well as clients in Hong Kong, London, Milan, all 50 states and KC. Please join us for our Bash at 324 W. 63rd in Brookside. There will be wine, hors d'oeuvres and great conviviality. Without your kindness we would not have a thriving gallery. Here's to the next 30!

Masks required, per the city mandate. 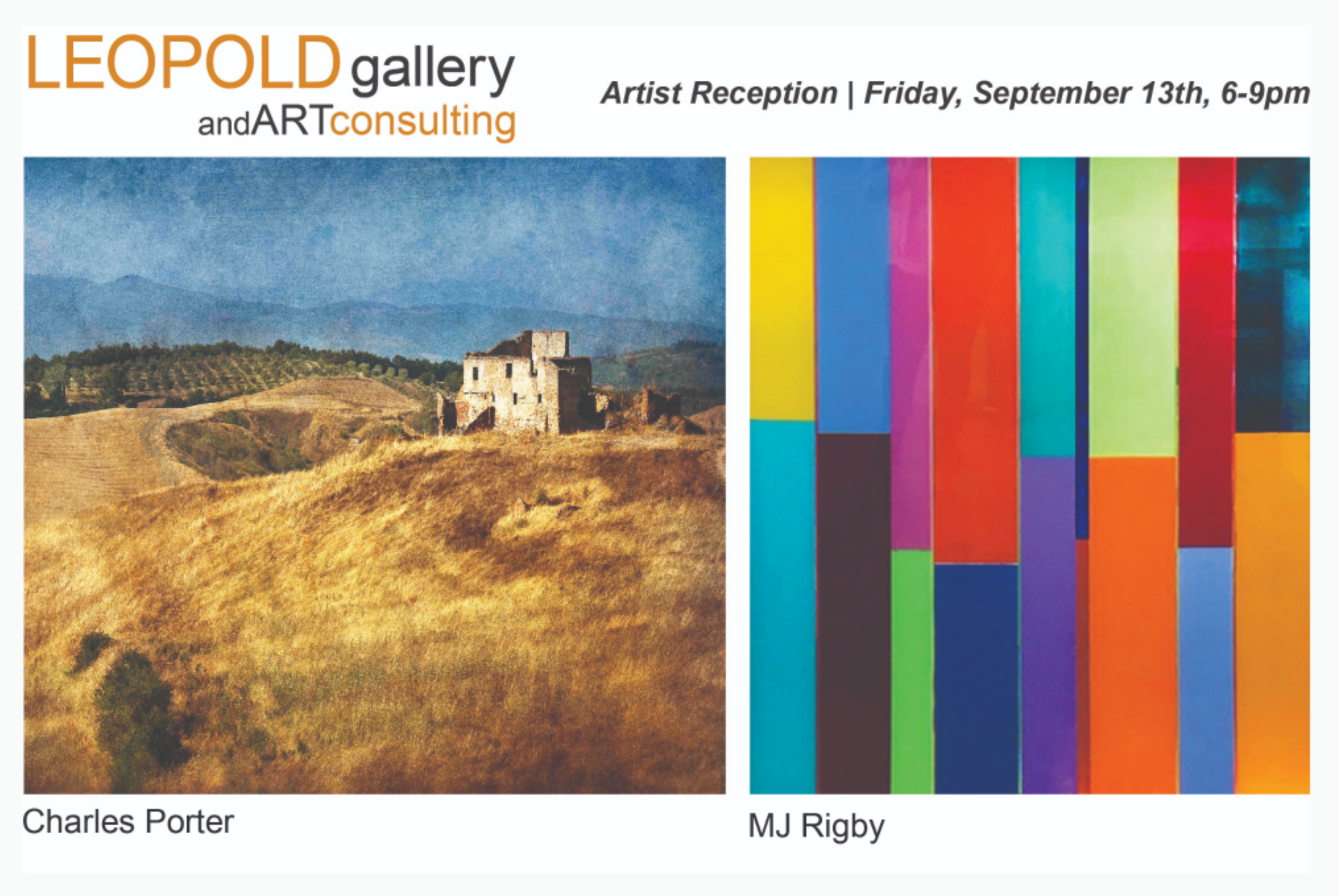 Exceptional Paintings and Photography by MJ Rigby and Charles Porter. 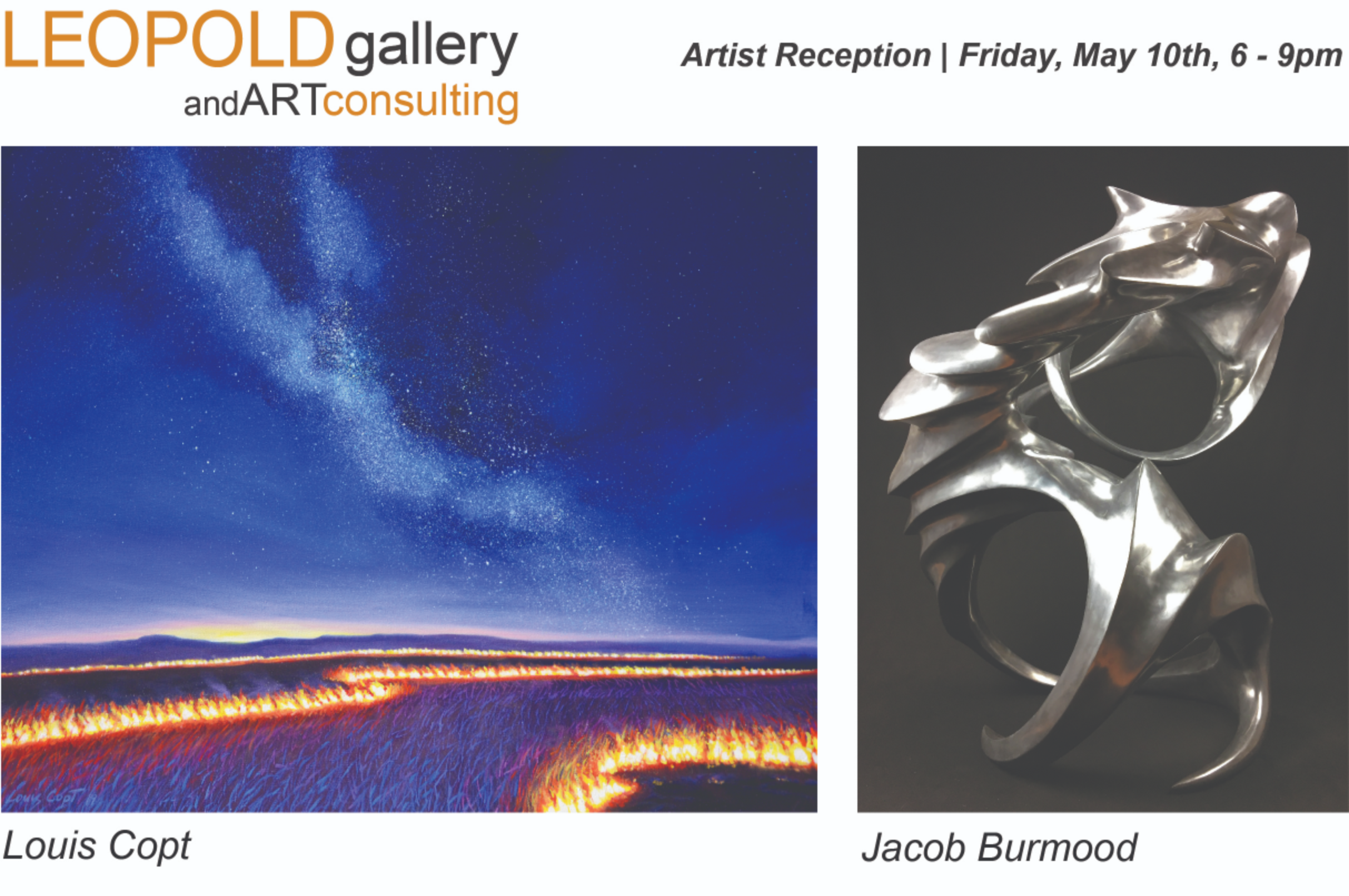 Louis Copt is renowned for his contemporary paintings of wooden barns--a type of rural architecture that is disappearing--and prairiefire. His work is in the collections of Arrowhead Stadium, FHL Bank, the University of Kansas, and with 1000s of private collectors nationwide.

With his recent monument a the National Soccer Hall of Fame in Dallas, and monumental works for Arrowhead Stadium and the City of Prairie Village, Jacob Burmood is a rising national star. He'll have several of his smaller works at the show--perfect for private collectors. 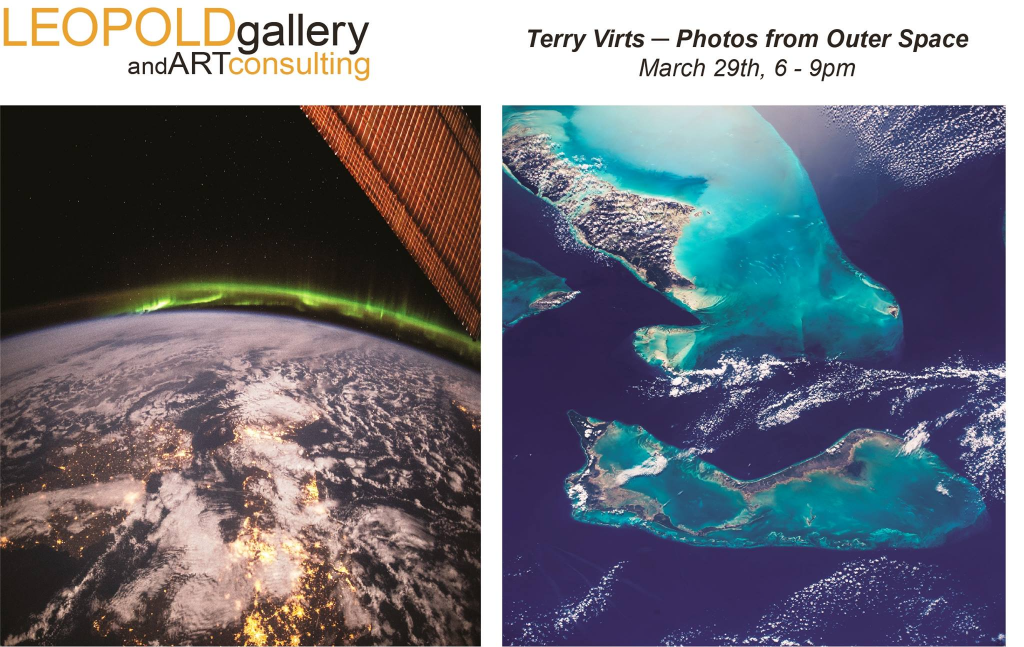 Terry is a lauded NASA Astronaut who piloted the Space Shuttle Endeavor, and commanded the International Space Station. He is also a professional photographer. In fact, National Geographic has recently released a book about his work. Both the book and his photos will be available for purchase. Please join us. Great art. Great wine.

In Cooperation with Rainy Day Books. 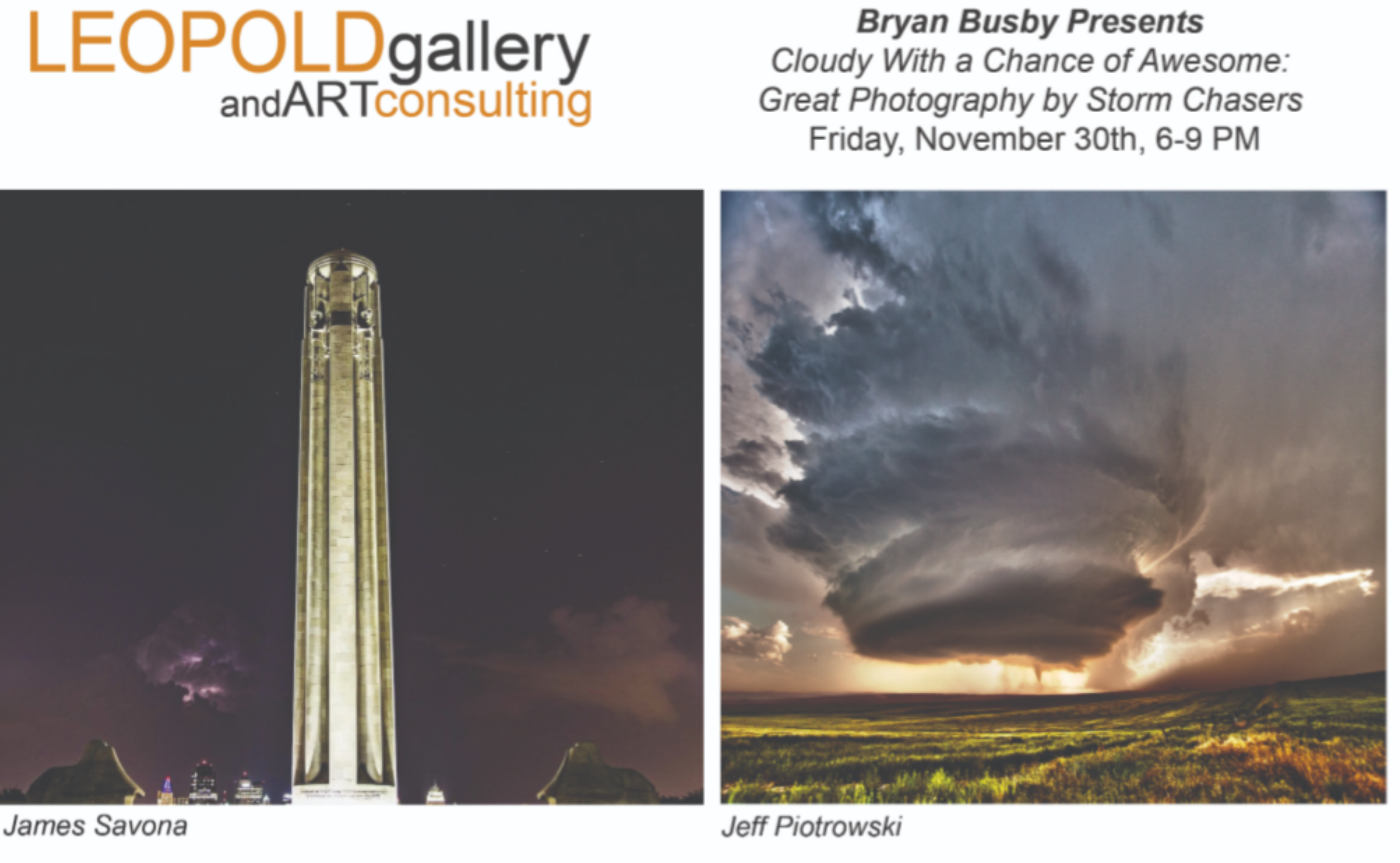 Join us at the Leopold Gallery, Friday, November 30th, 6-9 PM as Meteorologist Bryan Busby presents:Cloudy With a Chance of Awesome: Great Photography by Storm Chasers. The photography was created by noted regional storm chasers. Stop by for a glass of wine and poignant artwork; we promise you'll be moved. All works are for sale; a portion of the proceeds will benefit the Negro Leagues Baseball Museum. 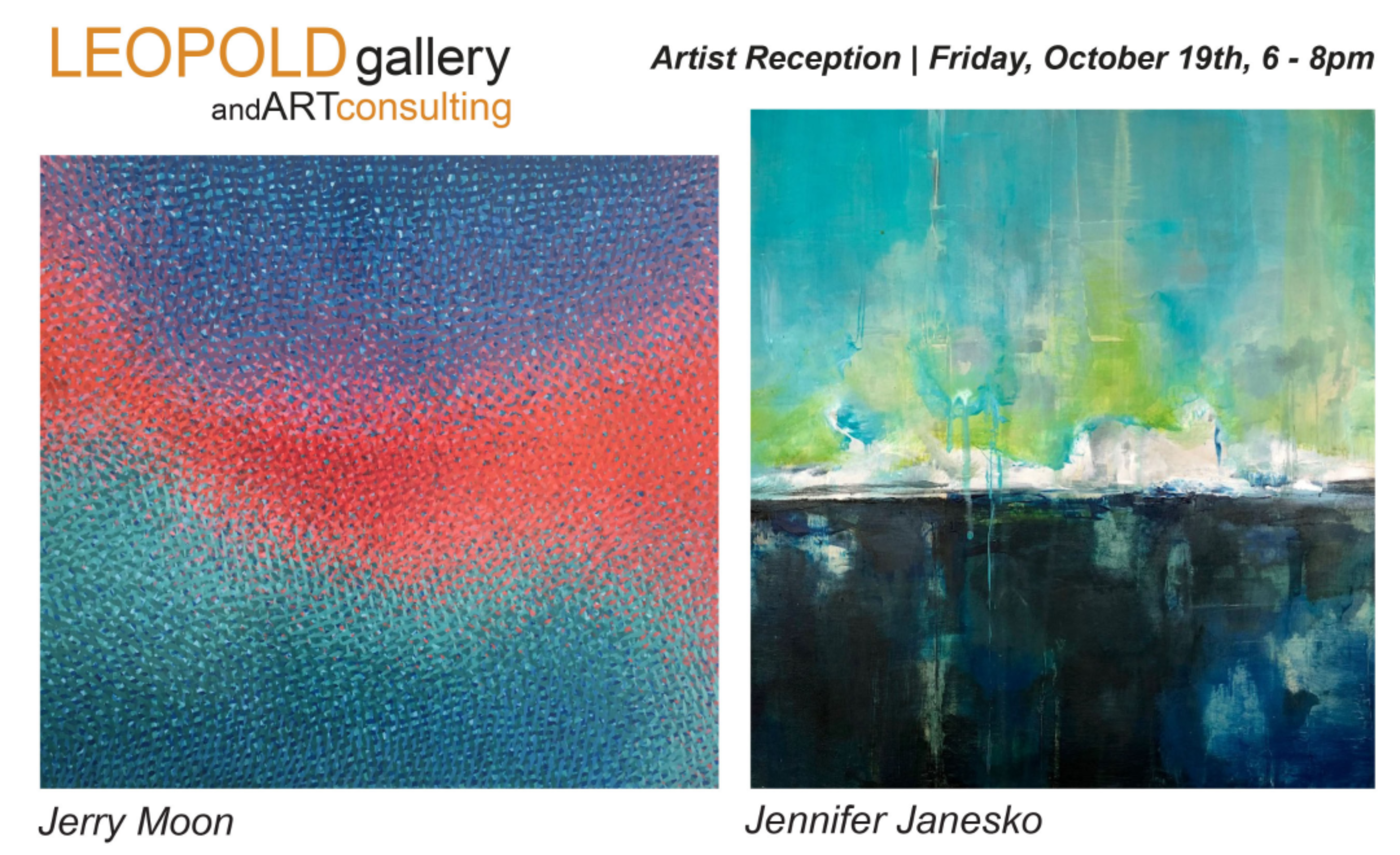 Jerry Moon has been painting professionally since 1990. Originally, Moon began painting in the demanding material, egg tempura. In recent years Moon has created work in oils, focusing on the Midwest and creating a unique rendering of clouds and landscape rooted in both real and surreal worlds. Collectors include H&R Block, Hallmark, the University of Kansas, BKD, the Overland Park Convention Center and private collectors nationwide.

Jennifer Janesko was awarded a full scholarship to Columbus College of Art & Design in Ohio. She then began a professional career as a fashion illustrator. Janesko's illustrative work transformed into figurative work then into abstraction and she began her fine art career. Janesko works with a mixed media approach, utilizing acrylic, oil, charcoal, pencil and ink. Her work has been collected nationwide and has been published in 4 books as well as featured on television and film.

Gabe Bloodworth is one of the lead glassblowers at the Springfield Hot Glass studio. His passion for glass sparked from a young age as his father has created blown glass art for over 36 years. Besides small glass pieces, Bloodworth creates large installations for corporate art collectors. Collectors of Bloodworth's work includes FHL Bank of Topeka, the University of Kansas, and private collectors across the country. 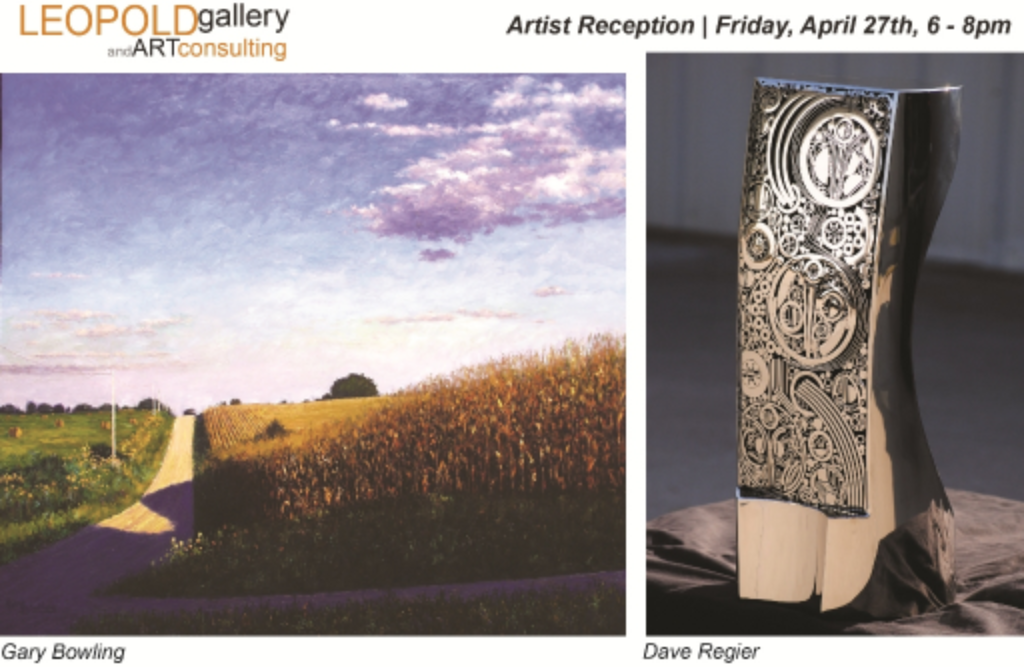 Gary Bowling is one of America's leading Impressionists, and a Missouri native. Gary's sense of light is unparalleled. Collectors include Hewlett Packard, UMB, the Iowa State Museums, and private collectors nationwide. 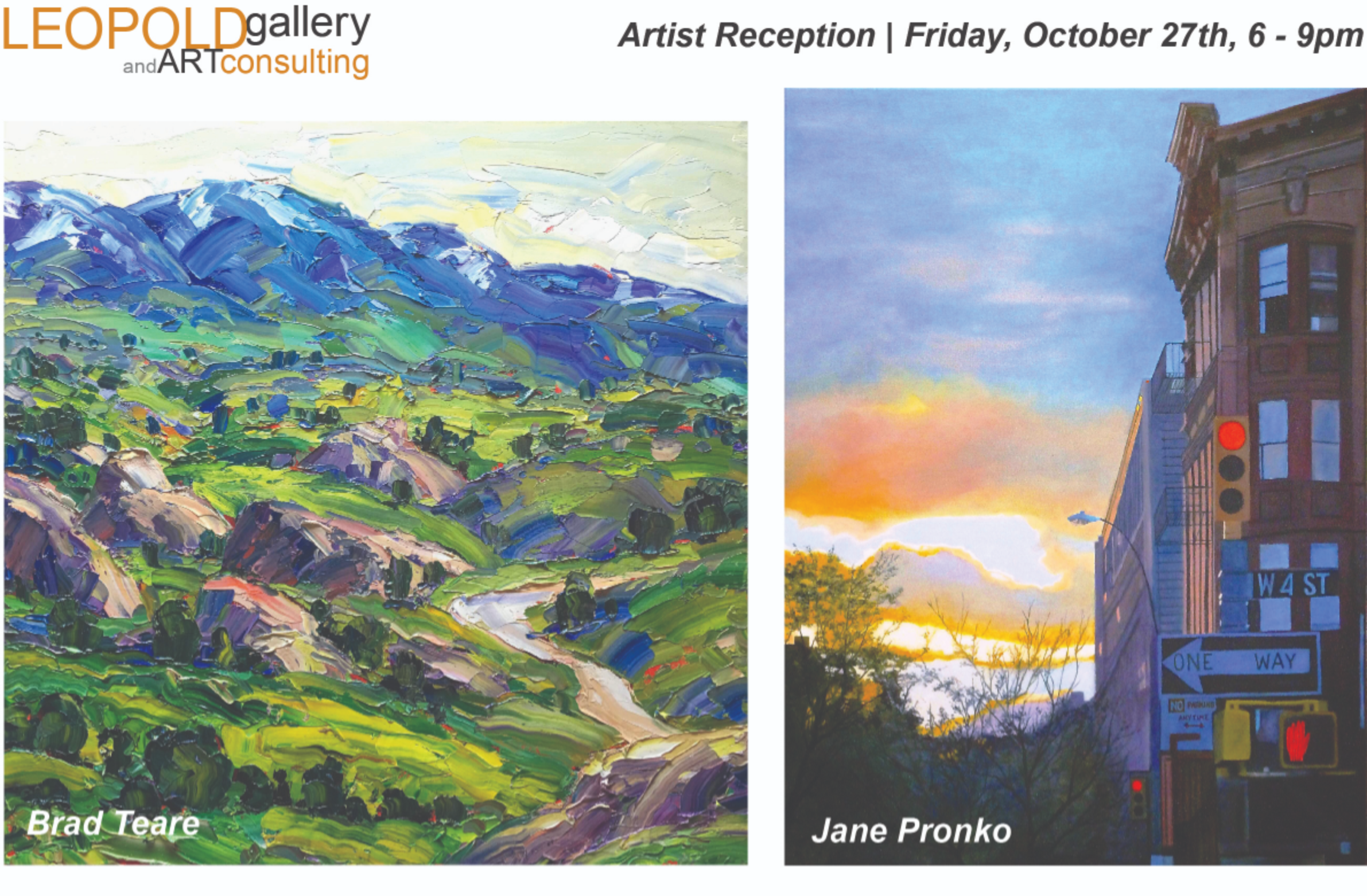 Jane Pronko is one of the premiere painters of uban landscape in the Midwest. Her oils of New York, Kansas City and Chicago are unique, sophisticated, and collected nationally. Clients include UMB, H&R Block, and Hallmark.

Brad Teare's pallette-knife oils of the Rockies and High Plains have earned him a following in Park City, Santa Fe, Kansas City, and across the country. Critics have compared his work to the great painter Birger Sandzen. 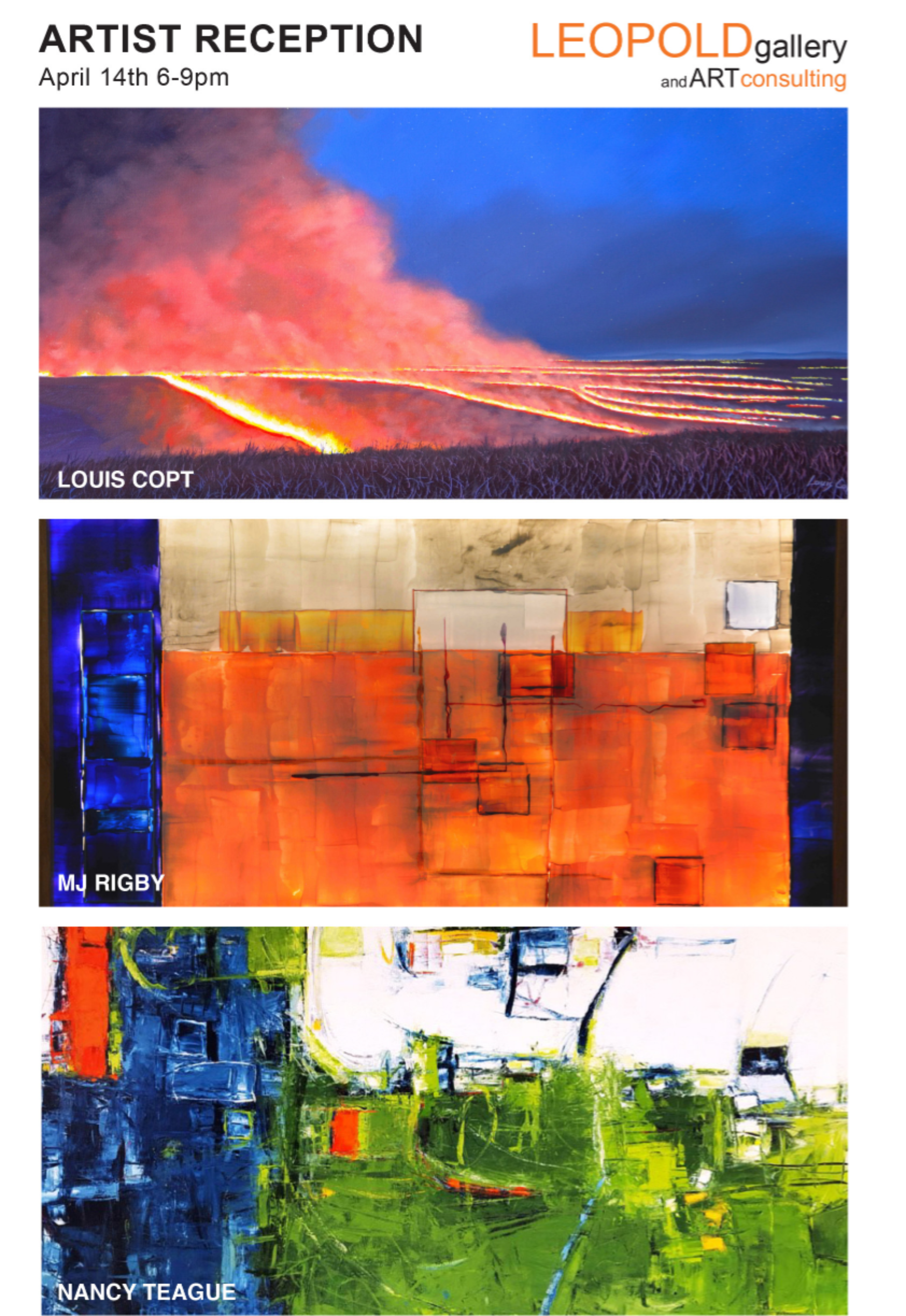 Louis Copt is in the collections of H&R Block, K-State, University of Kansas, and 100s of private collections.

MJ Rigby is in the collections of KU Medical Center, BKD, K-State and 100s of private collections.

Nancy Teague is in the collections of K-State, as well as with collectors in KC, Denver and Miami.

Jacob Burmood is a rising star with works at Seigfreid Bingham, Missouri State University, and BNIM. 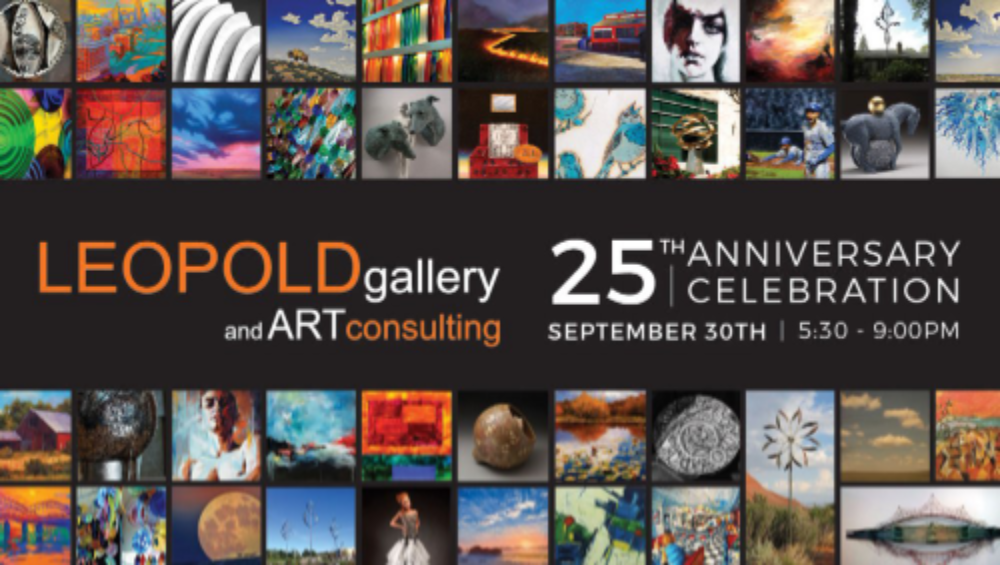 Leopold Gallery + Art Consulting is honored to be celebrating its 25th Anniversary and would like to thank all of its supporters.Please join us for an evening of fine food and wine, gift drawings, artist demonstrations and live music. 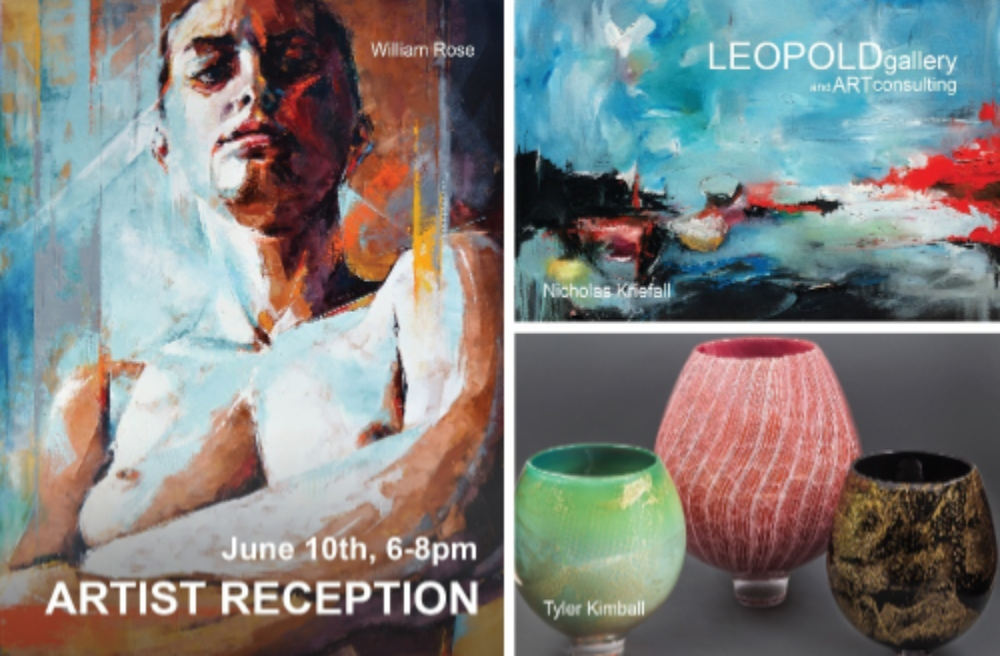 William Rose is in the collections of H & R Block, the Archer Foundation, TX A&M, and scores of others.

Tyler Kimball shows with galleries in Chicago and Seattle, and is in various collections nationwide.

Nicholas Kriefall shows with a gallery in Saint Louis as well as with us, and is in a wide range of private collections.

Prints are now available of the mural that William Rose painted for the Royals. Just give us a call if you'd like pricing. 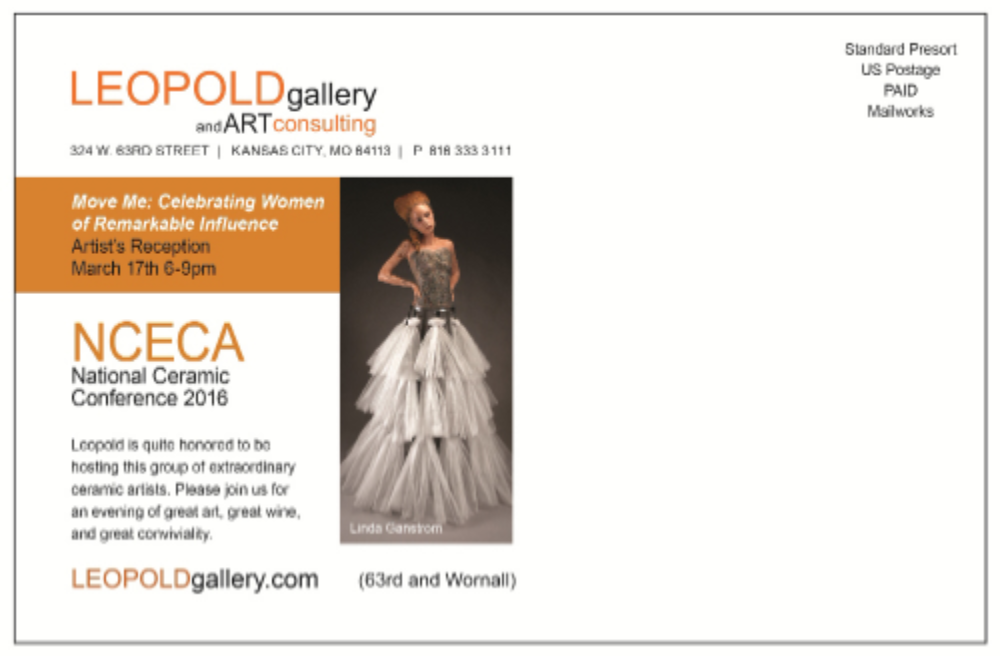 Move Me: Celebrating Women of Remarkable Influence.'' Leopold is quite honored to be hosting this group of extraordinary ceramic artists. Please join us for an evening of great art, great wine, and great conviviality. 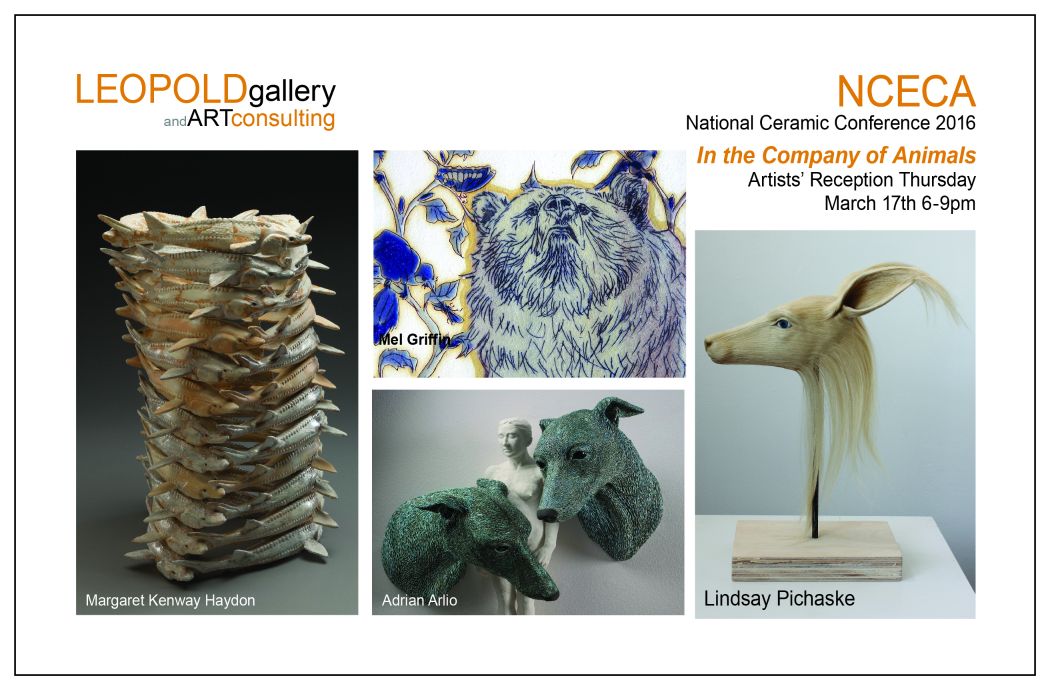 In the Company of Animals.'' Leopold is quite honored to be hosting this group of extraordinary ceramic artists. Please join us for an evening of great art, great wine, and great conviviality. 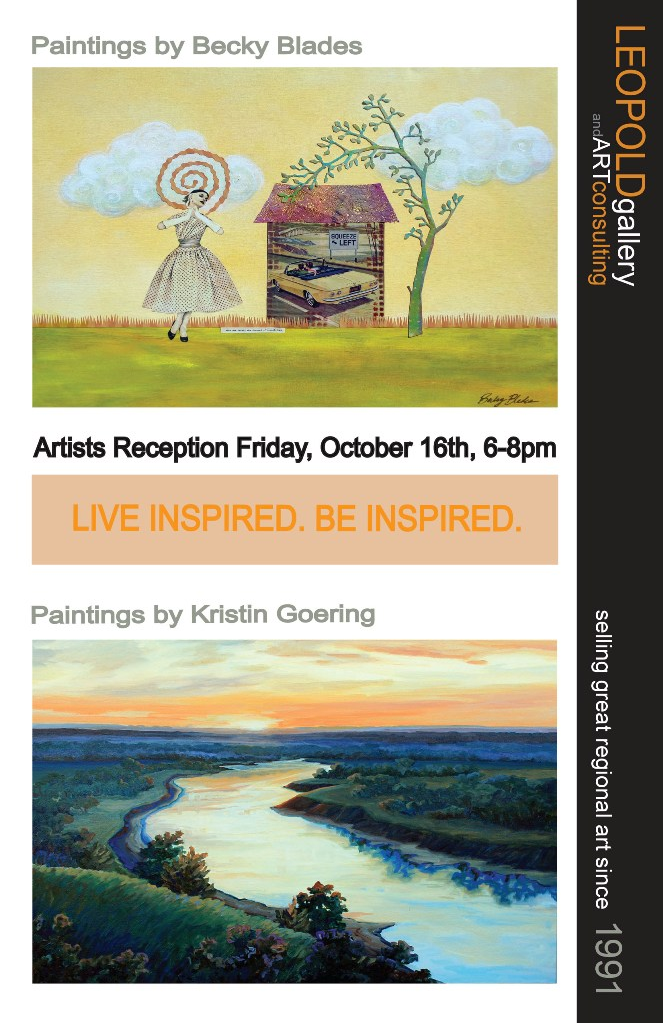 BECKY BLADES is a mixed-media artist with collectors in Angeles, Boston and Paris. She is author and illustrator of the award-winning book, Do Your Laundry or You'll Die Alone. She is chair of ARTSKC and a passionate advocate for the arts in Kansas City.

KRISTIN GOERING has been painting for over 25 years, and has works in the collections of The Chiefs, UMB Bank, University of Kansas Hospital, and a wide range of private collectors throughout the region. She is particularly inspired by the Flint Hills and Smoky Hills. 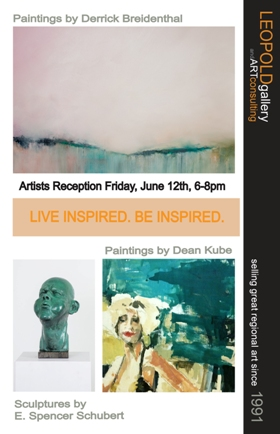 DERRICK BREIDENTHAL'S atmospheric works have become legendary. He has paintings in scores of collections such as Café Europa, H&R Block, Saint Luke's Health System, and with private collectors across the U.S.

E.SPENCER SCHUBERT has works in the Missouri Capitol Building, at K-State, Bernstein Rein, and with private collectors throughout the region. He is as noted for his portrait work as for his contemporary figures.

DEAN KUBE has clients like Seigfreid Bingham, H&R Block, Fishnet Security, and private collectors throughout the region, Dean has proven to be one of the most sophisticated figurative painters of this era. Think Lautrec in the 21st Century.

JENNY MCGEE'S work is largely composed of acrylic, resin, and crushed mother of pearl. Collectors include Sigfreid Bingham, the Midwest Transplant Network, and private collectors nationwide. Jenny shows in New York as well as with Leopold.

BRIAN HINKLE has exhibited his paintings across the US as well as Florence, Italy at Bienalle Internazaionale Dell'Arte, He is a native Kansas who primarily works in oil. Colletors include H&R Block, BKD LLP, and private collectors nationwide. 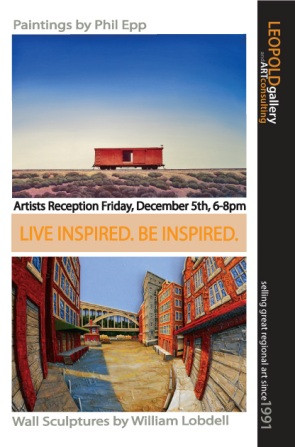 PHIL EPP has become a legendary painter over the decades, showing with galleries in Sante Fe, Taos and with Leopold. He has work in the collections of MGM, H&R Block, Arrowhead Stadium, and private collectors nationwide. His paintings of windswept praries and sun-drenched deserts continue to fascinate a widening audience.

WILLIAM LOBDELL since graduating from the Kansas City Art Institute in 1988, William has established himself as one of the most unique sculptors in the region, creating stunning interpretations of various structures through an ingenious use of found objects.Collectors include Fishnet, Saint Luke's Health System, KCP&L, the Royals, and private collectors nationwide. 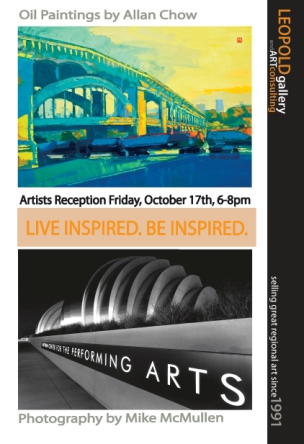 ALLAN CHOW works largely in palette knife and is broadly respected for having mastered this demanding technique. His collectors include the Kansas City Chiefs, Fishnet Security, H&R Block and private collectors nationwide.

MIKE MCMULLEN  learned aspects of his dramatic style through Ansel Adams, among others. Collectors include Univeristy of Kansas Hospital, Seigfreid Bingham, the Kauffman Foundation, and private collectors nationwide. 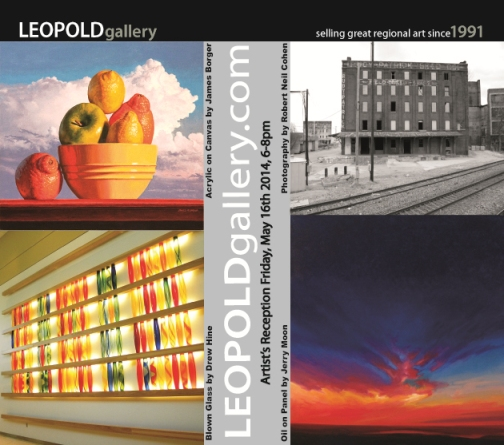 JIM BORGER has been painting for 25 years. His unusual approach to placing still life within a landscape has struck a nerve with collectors. His work is in the collections of Saint Luke's Hospital, Foulston Siefken, and with private collectors nationwide.

DREW HINE has blown the glass for several of Leopold's legendary art projects, including massive installations for the University of Kansas Hospital, H&R Block, Sprint Center, Kansas State University, and with private collectors in some 20 states.

ROBERT NEIL COHEN's phtographs of Southern California and Kansas City are noted for their understatement, sophistication, and humor. His works are in collections in New York, Los Angeles, Kansas City, and many cities in between. He has exhibited at Edward Cella Art and Architecture in Los Angeles, and was featured at Photo LA this year.

JERRY MOON has been painting professionally for 25 years. His landscapes have an atmospheric quality that lends them a unique power. Collectors include H&R Block, BKD, the Overland Park Convention Center, and private collectors throughout the region.

Thanks for signing up!